The Millennium Alliance is excited to announce Maggie Chan Jones, Founder & CEO of Tenshey, Inc. and Former Global CMO of SAP as our Keynote Speaker at The Transformational CMO Assembly taking place at The Fairmont Hotel Dallas, TX from April 17-18, 2019.

Maggie Chan Jones is an award-winning CMO and the Founder and CEO of Tenshey, a startup dedicated to advancing gender diversity through executive coaching for leaders at all career levels.

A trailblazer for women in technology, Maggie was the first woman to be named Chief Marketing Officer of SAP and has held leadership positions at Microsoft, Level 3 Communications, and Sun Microsystems.

Frequently recognized as a thought-leader, Maggie was named one of the “world’s most influential CMOs” in 2017 by Forbes. She’s a recipient of a Women of the Decade in Marketing, Branding and Communication award by Women Economic Forum, acknowledged for creativity and storytelling by the CMO Club Awards, and named a Top Ten Most Interesting B2B Executives, Woman of the Year, among others.

Maggie received her undergraduate degree in business from Binghamton University and holds an MBA degree from Cornell University, where she serves on the Board of Directors for the Cornell Johnson NYC Club. She resides in NYC with her husband and their four-legged kid, a miniature poodle named Charlie.

About The Transformational CMO Assembly 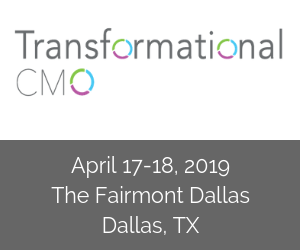 C-Level executives around the world are anticipating that digital technology will continue to drive business. We’ve put together a series of executive education roundtables, keynote presentations, collaborative think tanks, educational workshops, and networking sessions with our industry experts and Advisory Board for The Transformational CMO Assembly.