It’s On: Disney Looks to Embrace Technology to Take On Netflix

Disney is one of those household names that has continually made landmark strides across the media industry throughout the years, setting a fast pace for their competitor companies within the industry. Although the massive organization is known for its success on the big and small screens to print, rivals from the technology world are forcing the company to confront a difficult question: can it transfer its worldwide dominance to a Netflix-style streaming business? For CEO Roger Iger, this questions looms over heavy.

The days where Disney is concentrating on releasing movies and TV shows are coming to an end. Their empire is built, so Roger Iger has a tremendous responsibility on his plate: developing the technology and infrastructure to create a new online, direct-to-consumer entertainment service.

Netflix is the biggest streaming giant in the industry. Competition from streaming competitors like Amazon Prime Video and Hulu are continually looking to dismantle that power Netflix holds in the industry. Disney is already playing catch-up to Netflix when it comes to distribution technology, and Netflix has been ramping up its own content production to rival that of Disney’s.

However, there is rising anticipation around “Disneyflix,” the industry nickname for the company’s future Netflix competitor.

“Investors underestimate how difficult direct-to-consumer is. Success is not going to be measured in millions. It’s ‘Can DisneyFlix be in 100 million to 200 million homes worldwide?’” Says Rich Greenfield, Analyst at financial analysis firm BTIG research and regular critic of Disney.

From both Roger Iger and the industry’s perspective, Disney is still making plenty of money from its TV and movie businesses, but conventional wisdom in the media industry is that cord-cutting combined with the advantages of the direct-to-consumer model is the future.

Disney has invested in technology companies for decades, but its track record with these companies is spotty. From an executive technology perspective, Disney’s tech and digital acquisitions have underperformed, but noted that the company has made a variety of bets on up and coming tech companies. Even though it is clear that they have executed and delivered on the promise of good content, in comparison to their tech acquisitions, it is less than stellar.

Disney’s direct-to-consumer initiatives should not go ignored; the launch of ESPN+ has proven to be successful even though Iger said they have “relatively modest expectations” for the streaming service. Although there are many difficulties as well as expectations for Disney to launch a streaming service that rivals Netflix, we can expect to see its debut when the company comes to term with how much content it plans to create in the future.

With 53% of Marketers planning on adopting Artificial Intelligence in the next 2 years, 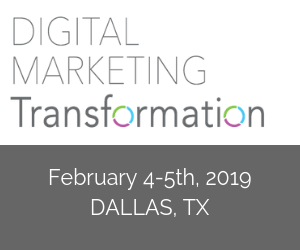 the digital marketing revolution is just getting started. CMOs and CDOs alike are seeking new ways to maximize their digital reach to attract new business to, as well as deliver enrich, personalized experiences to existing customers.

The Digital Marketing Transformation Assembly will bring together North America’s most prominent digital marketing technology and business leaders from all major consumer-driven industries to discuss the latest technology, innovations, and strategies driving digital marketing in 2019 and beyond.

The Questions That Begin Your Digital Transformation Journey